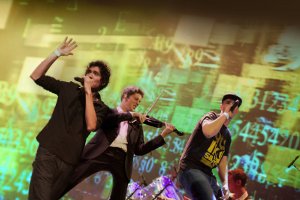 Coming to Cape Town: an explosive mix of hip-hop and classic – EINSHOCH6 to kick off Musik+X exhibition

With a unique blend of lyrical hip-hop and inspiring classical music, EINSHOCH6 will give the audience at musik+X an entertaining experience of the German language. The group has recently cooperated with the language courses of the Deutsche Welle to provide learners of German with an entertaining way to learn
the language.

The musik+X exhibition is organized by the Goethe-Institut South Africa and will showcase multiple genres of music coming from Germany. EINSHOCH6 will be making a second appearance at the Paul Roos Gimnasium in Stellenbosch and also hold workshops at different Secondary Schools. Their performances are part of a tour of concerts and language learning workshops that will include stops in Brazil, East Africa, Serbia and the United States.

The Munich-based group’s current album “Lass uns reden” (Let’s talk) is the soundtrack from the DW language learning series “Bandtagebuch” (band diary) which was launched in mid-2013. All the songs were written especially for learners of German. The 53-episode series follows the band on a tour of Germany that includes the Oktoberfest in Munich, the Berlin Wall and the Carnival in Cologne. The group consists of six classically trained musicians and three rap lyricists.

Whether you learn German or not – you will enjoy the concerts, for sure!

There is no charge to attend the concerts.

In cooperation with Deutsche Welle