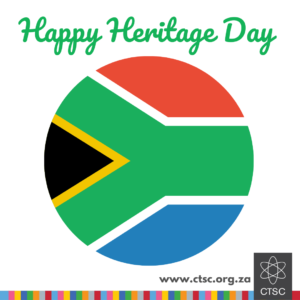 The 24th of September use to be called Shaka Day, in memory of Shaka, the Zulu king (they think this was the date of his death in 1828.
King Shaka was integral in uniting the different Zulu clans into a cohesive nation. They would gather at his grave each year to honour him on this day.
When Public Holidays Bill presented to the new democratic Parliament of South Africa in 1996 did not have 24 September included on the list of proposed public holidays.  The Inkatha Freedom Party (IFP), a South African political party with a large Zulu membership, objected to the bill.  A compromise was reached and Heritage Day was accepted as a public holiday and we now celebrate the diverse cultural heritage that makes up a “rainbow nation”.  It is an opportunity to celebrate the contribution of all South Africans to the building of South Africa.

We have three fun hands-on activities that you can do at home. Check them out below… 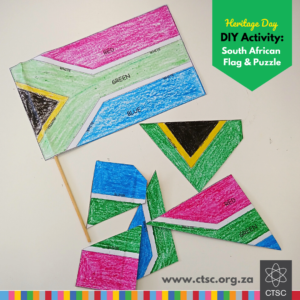 It is #HeritageDay in South Africa, let’s take a look at how the South Africa flag was created and what the law is around displaying the flag.

In 1993, the Negotiating Council, which was in the process of setting up an interim constitution for the newly democratic South Africa, set up a Commission on National Symbols.
So what was their job?
– Present four potential flags to represent South Africa from 1994 onwards.
– The presented four flags in just five weeks (they asked the public for help)

The flag needed to meet the following criteria:
• It must be a unique design
• It should promote and symbolise national unity
• Design must be simple (a child must recognise it and be able to draw it)
• Preferably primary colours
• Must be full colour

The convener on that committee was the late Mr Fred Brownell, who designed the flag we know and love now just a month before South Africa’s democratic elections, and it was first used on 27 April 1994.

Did you know there are things you shouldn’t do with the South African flag?
– The flag cannot be eaten over or used as a floor mat. It’s considered disrespectful.
– Don’t flip it or reverse it! Usually, a nation’s flag that is upside down means the country has surrendered to an enemy. Keep the red part at the top 😉
– The rules call for the flag to be taken down before sunset (for state and personal use) unless it is very well lit and displayed clearly.
– Any monument or historically significant statue or plaque may not be wrapped in or covered by the South African flag. 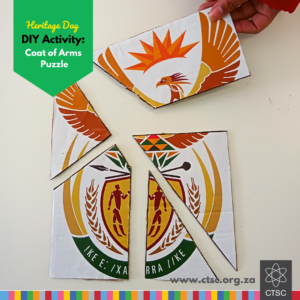 The national coat of arms, or State emblem, is the highest visual symbol of the State. This emblem is seen on all official documents in the state, from birth certificates to passports. A new coat of arms, introduced on Freedom Day 27 April 2000, replaces one that was used in South Africa since 17 September 1910. The change reflects the Government’s aim to highlight the democratic change in South Africa and a new sense of patriotism. The motto is written in the Khoisan language of the ǀXam people and translates literally to “diverse people unite”.

What you will need 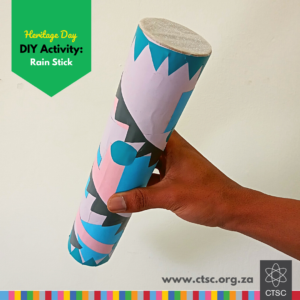 Rainmakers actually simulate the delightful sound of falling rain. These Rainmakers or Rainsticks originated hundreds of years ago in South Africa and were used during native ceremonies.

What you will need:

The twisted foil inside the tube slows down the rice as they fall from one end to the other. This falling rice hits not only the foil but the sides of the tube and the paper coverings on the ends. This hitting of the rice causes vibration and that vibration causes sound.