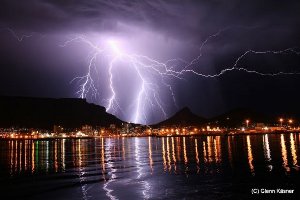 Lightning is one of nature’s most impressive events. It is captured in art, literature and music. It has been the recorded cause of damage, death and injury for as long as the human memory. It is often only thought of after a disaster… This happens to individuals and to industry, and it stimulates our need to know more. It has captured the imagination of engineers and scientists all over the world. It has spawned multinational industries, and it has also provided a fertile playground for mystics, spin-doctors and catalogue salespeople. It has resulted in hysterical outbursts and absurd claims – and, indeed, accusations. It has been used as a ‘weapon’, and for ‘punishment’; whereas we believe it is dangerous to stand under a tree in a lightning storm, we also believe certain trees actually protect us. The fact of the matter is that this beautiful phenomenon, and its effects, is still not well understood by most people. Yet it is, without doubt, a fascinating phenomenon.

South Africa and the Gauteng region in particular, has been the home to formal lightning research for about one hundred years. It has probably been a prime site to observe lightning for thousands of years – if not millions. The earliest hominids would have witnessed this event right here, on the plains of the Highveld. As will be shown, we understand this phenomenon on a wide variety of levels, far, far better than we ever have in the past. Yet the presentation will also challenge us to address the fact that this country continues to have a high rate of death due to lightning. But we will start at the beginning: we will trace the journey of an electron as it moves from a place of calm ‘neutrality’ to its role in the formation of a lightning strike. We will revisit the formation of the lightning discharge, but more importantly, will pay particular attention to the types of damage and injury that lightning can cause, and how to mitigate against those. To do this, we will consider a number of case studies of actual events, and look carefully at some of the latest local research that is guiding our understanding of the phenomenon itself, and the development of strategies to protect living beings and systems.

We’ll do the big bang theory in pictures, and we’ll tackle belief systems and culture without offence. We will include a special focus on current research directions – and will specifically consider some of the less obvious research intersections that have evolved right here in South Africa. For instance, we will consider the role of mythology and literature; bones, witches and Totius; geology; mathematics and statistics as we strive to learn more about this beautiful yet dangerous natural phenomenon.

Prof Ian R Jandrell
PrEng, BSc(Eng) GDE PhD, SMIEEE FSAIEE
Ian is Dean of the Faculty of Engineering and the Built Environment at the University of the Witwatersrand, Johannesburg. He is also a Personal Professor in the School of Electrical and Information Engineering at Wits, where he holds the CBI-electric Chair of Lightning. Ian is an Associate Editor of the Journal of Lightning Research and a Member of the Scientific Committee of the International Conference on Lightning Protection. He is a registered Professional Engineer and is a regular consultant to industry in the areas of forensic engineering, earthing and lightning protection and industrial EMC. Ian is a Senior Member of the IEEE (SMIEEE) and a Fellow of the South African Institute of Electrical Engineers (FSAIEE). He is a previous recipient of the SAIEE Engineer of the Year award (1994), and SAIEE President’s Award (2011). He is a rated researcher with the NRF, and serves on the board, or as a trustee, of a number of not-for-profit organisations including the Eskom Expo for Young Scientists, the Accenture Education Trust, and Outreach Engineering.

The Bernard Price Memorial Lecture is the premier annual lecture of the South African Institute of Electrical Engineers. It is of general scientific or engineering interest and is given by an invited guest, often from overseas, at several of the major centres on South Africa.  The Lecture is named in memory of the eminent electrical engineer Bernard Price. The first Lecture was held in 1951 and it has occurred as an annual event ever since.

The talk is hosted by the SAIEE but anyone is welcome to attend. Please RSVP to admin.wcape@saiee.org.za