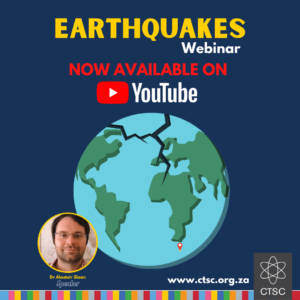 If you missed out on the Earthquakes Webinar on Thursday evening you can watch it now on our YouTube channel.

Once again a big thank you to Dr Alastair Sloan from the University of Cape Town for taking the time to present this fascinating webinar. Let us know if you found this webinar interesting and if there are any other topics you would like us to host webinars on. Watch this space!

When the earth moved (for some) this past weekend in Cape Town, some of us just put it in the ‘well it is 2020’ basket but you may wish to learn more and ask questions. Indeed we did experience (to varying degrees) the effects of three earthquakes.

Dr. Alastair Sloan will give a brief introduction to where and why earthquakes happen, before relating this to the three widely reported earthquakes that occurred this weekend. It will discuss what the past can tell us about the type of earthquakes that might occur in the Western Cape and South Africa, and briefly cover what you should do if you are unlucky enough to experience a strong earthquake in South Africa or abroad.

His research interests range from geomorphology (the study of the forms of the Earth’s surface), through seismology (studying earthquakes using the waves that they produce), to geodynamics (the study of the processes that control the deformation of the Earth). His research group at UCT has recently been working on projects looking at active faults in Namibia, Malawi, and Scandinavia, and he has worked on the tectonics of Iran, Mongolia, Myanmar, India and Uzbekistan.