FIRST LEGO League 2016 sponsored by SAP Africa was a huge success this past Saturday (6 November 2016). We would like to thank SAP Africa for making this tournament possible. We would also like to thank all the volunteers, judges and referees that gave up their time to help out with running the tournament, without them it is impossible.

AND FINALLY a BIG CONGRATULATIONS to Team Hyperion Bots from Parklands College for walking away with the 2016 Champions Award. 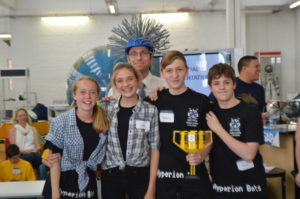